How did the famous neurosurgeon Ben Carson make his breakthrough? Why is a lion the king of the jungle? And who do YOU want to be? 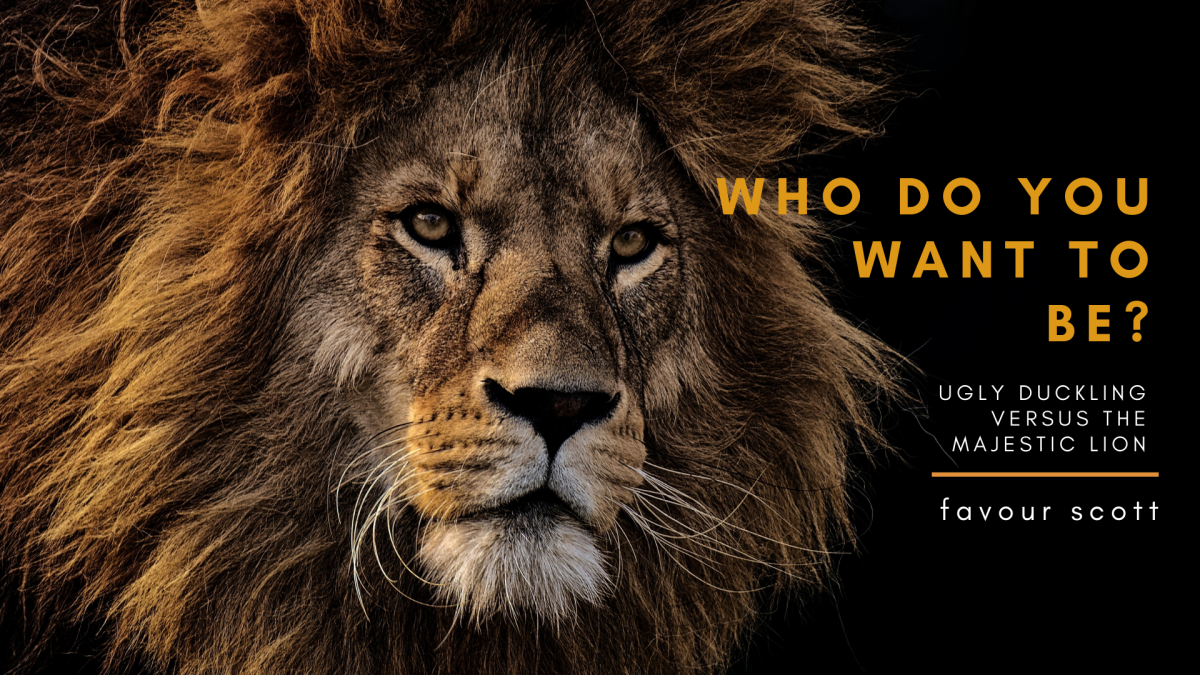 Who do you want to be?

You probably remember the story of the ugly duckling. The ugly duckling, an ugly young duck was criticized by the other ducks. Whenever it desired to play with them, it was mocked at and told;

“Get off, you ugly duckling”.

But what it didn’t know is that it was beautiful in its own unique way. It wasn’t a duck, but a beautiful swan. One of the most beautiful of all birds.

Do you know why people harass you, mock you or probably embarrass you? Have you ever wondered why most people look at you and criticize you?
Why most people underrate you?

People treat you the way they do, not because you are stupid, or because you really are what they say you are.

People assess you based on the way and manner you carry yourself.

A lion is the most feared, respected and majestic animal in the wild.

A lion will never associate with any other animal because it knows who it is. When a lion roars, all the animals in the forest will hear it and shiver. When a lion steps its foot on a particular place, the inhibitors of that place will tremble because they know that something great has arrived.

People can only pull you down if you allow them to do so.

If only you know exactly how blessed, mighty and great you are, you’ll stop underestimating yourself.

You are greater than you think. Yes, I’m talking to you. You are underestimating your potential.

Who do you WANT to be?

You are not an ugly duckling, you are a majestic lion.

“When the purpose of a thing is not known, abuse is inevitable”

The mockery and scorns from people should be the force that propels you to greater heights.

Remember the nicest necklaces, wristwatches and most beautiful of all ornaments all went through the hottest flames.

My dear friend, you are like a seed. A seed cannot be buried, it will always grow back into a beautiful and mighty tree.

People will never stop trying to pull you down because you make them enjoy doing it.

Do you know why people never stop criticising you?

Assuming you had let the scorns, the mockery from people shapen you in the right direction, they would have stopped a long time ago,

Instead, you blame yourself for being YOU. But have you paused to ask yourself, who do YOU want to be?

Beloved one, people laugh at you because you are different, but instead, you should laugh at them because they are all the same. Being different is not a bad thing, but being like everyone else is as deadly as a poisonous viper.

So be happy you are different because “the different one is the one that progresses.

Never let anyone bring you down because you are;

And above all, there’s no one else like you in this world. You are unparalleled.

God created you without blemish, you are perfectly perfect in perfection.

God commanded other organism, trees and planes but he took time to create you so as to make you perfect.

Ben Carson was mocked by his classmates, they called him a dullard and this saddened him. But thanks to his mother, he realised that their scorns were the force he needs to propel him to greater heights.

And today, he’s one of the best Neurosurgeons in the world.

Self-esteem means confidence in one’s own worth and satisfaction in oneself.

No matter what happens, never let what people say becloud your self-esteem. The opinions of people do not matter. No one has a say over your life, so why should you care?

Believe that you are the best because if you don’t, no one will. It’s what you say to yourself that manifests in your life.

Assuming you continue reminiscing over what people say about you, you’ll eventually blame your parents, yourself and everyone around you.

But if you say good things to yourself, your mind begins to work in that consciousness that you are the best, and in a short while, you actually become the best.

The mind is the greatest asset God bestowed on us.

Take every negative word said to you as an encouragement, and you’ll see, the sky won’t be your limit, but a starting point.

Never let anyone limit you. You can do beautiful things for this world, it all depends on you. All you have to do is put your mind to it. And keep asking yourself the question that matters – who do you want to be?

Favour is the driving force behind the website TheFavourIdeas. He’s an author, enthusiast and a futurist. His goal is to reorient people on the pros and cons of life.

One thought on “Ugly Duckling or Majestic Lion: Who Do You Want To Be? by Favour Scott”